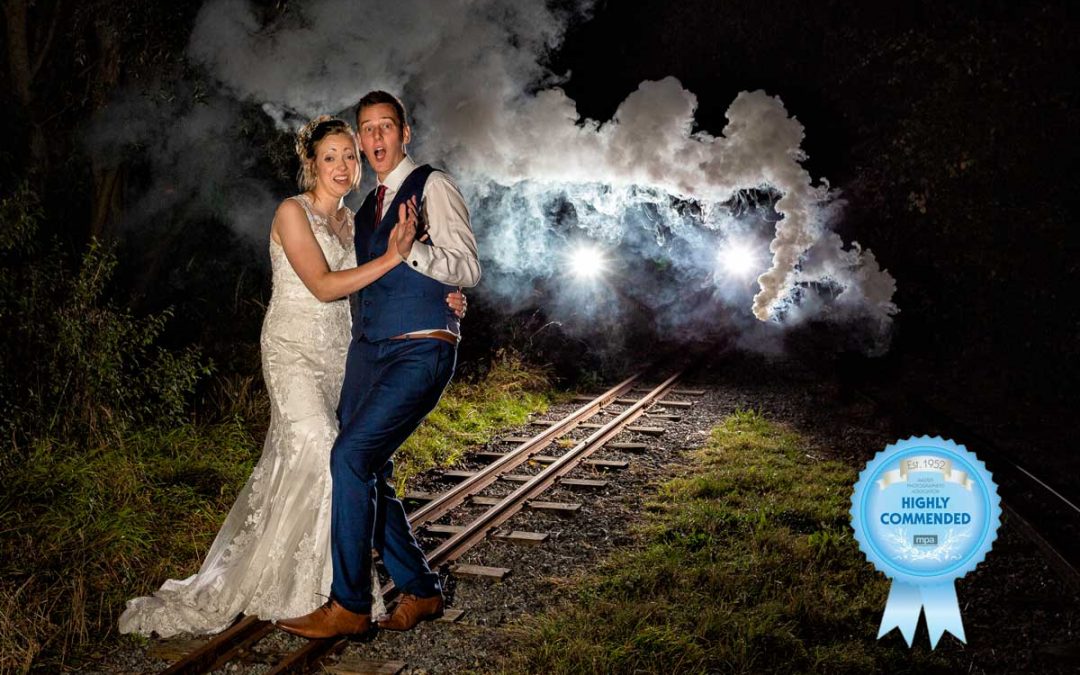 Would You like Some of Those Epic Night Images to Accompany Your Wedding Photographs?

Night Wedding Photography is one of my favourite parts of a wedding day to photograph. This is a time when you can get really creative with off-camera lighting using a whole host of accessories to create some unique images.

Many of my couples book me after seeing my night photography wedding images and want something a little bit unusual to accompany their wedding photographs. I love talking to couples about their interests and trying to incorporate that into the ideas we come up with. Often I will be sent a screenshot of an image a couple like, I’ll then use this to put a different spin on the image to come up with something unique to them.

Not one for settling for the ordinary

I was recently asked to incorporate a railway line into a wedding photograph, that was simply what was asked, no other details. Not one for settling for the ordinary I knew I needed to come up with something special for this so I thought about how I could bring the scene to life. The track was a miniature railway that wasn’t in use just in case anyone was worried about safety! You can check out what we came up with below.

Wedding photography doesn’t have to be ordinary, Fancy adding some creative flair to your photographs?

How to make it look realistic that a train was actually coming towards the couple.

I decided to place two off-camera remotely triggered flashes just above the tracks to look like the train’s lights. On its own, this wasn’t convincing enough so I added in some white smoke in an attempt to look like steam and to add a sense of mystery to the image. The last step was to make sure the couple looked like they were actually about to have a train run them over so with a little direction I think we pulled off a scared look.

To light the couple I used a single strobe light with a grid and defuser and balanced the two train light flashes to be just the correct brightness to not light up the back of the couple too much. A couple of test shots later and we were ready to go. 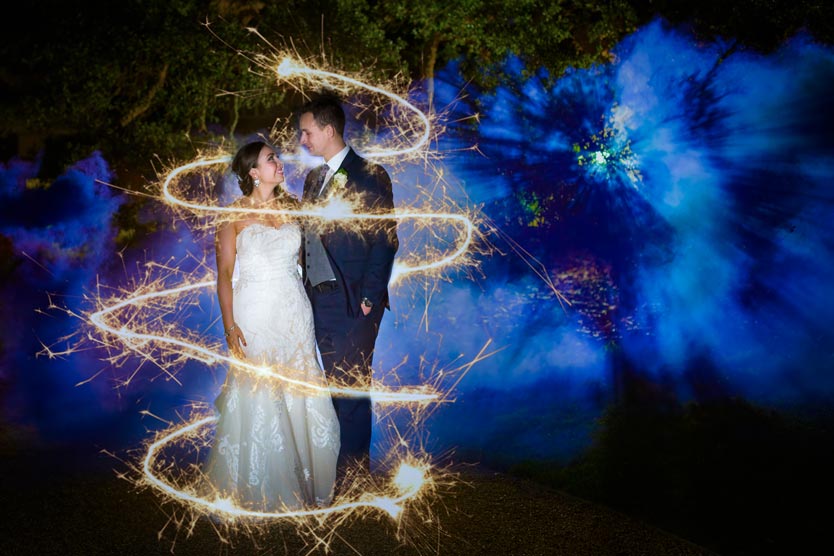 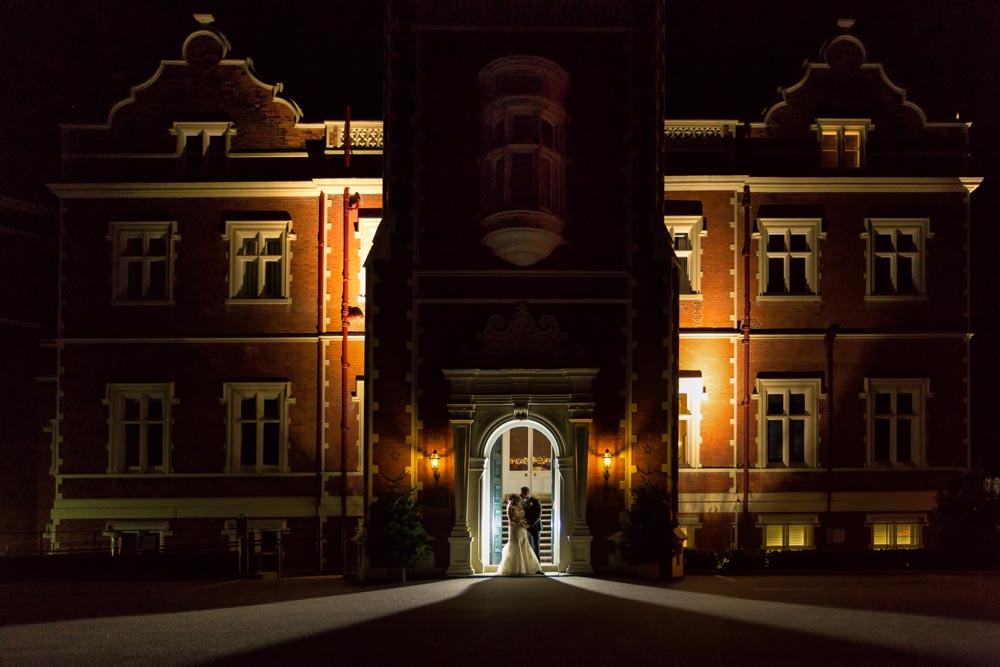 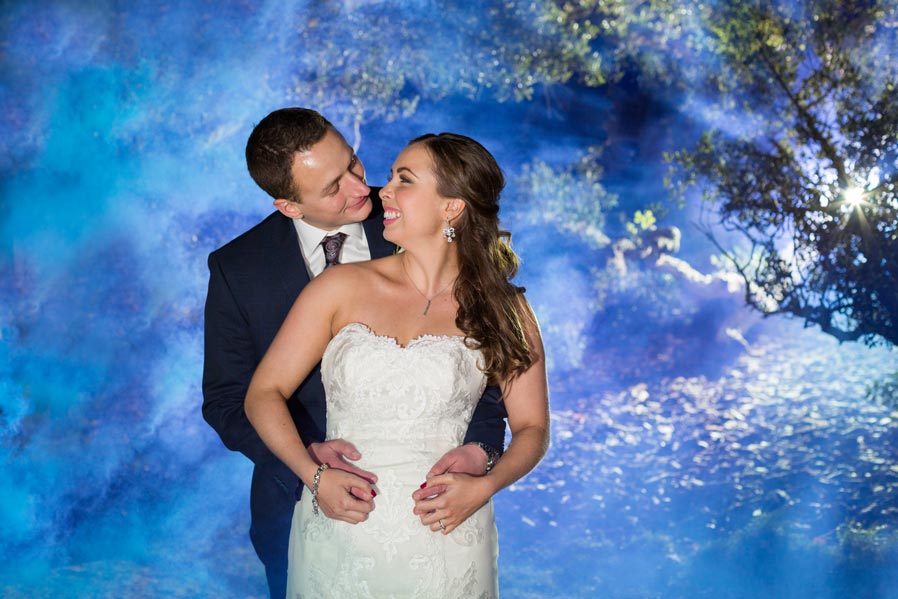 How to keep the shutter open long enough for the letters to be written but avoid the bride and groom’s movement causing them to appear blurry.

I worked out that I roughly need 10 seconds for the letters to be written with sparklers so I estimated the exposure and took a test shot with no lights, I adjusted and repeated this step until I could take a 10-second exposure and not see the bride and groom in the image at all. This meant cutting out all the available light until they were completely dark so I would know that only my flash would be lighting them up.

Once I had this set I got the bridesmaids and best man in position and agreed with them who was creating which letter.
Now everything was in place I configured a flash to fire on the couple at the end of the 10-second exposure, this is called rear curtain sync.
We had plenty of sparklers so I thought we may as well go for it straight off, the first image came out and I found I had a little light on the couple from the sparklers which had caused a bit of blur so with a small exposure tweak we went for it again and viola, nailed it in-camera. 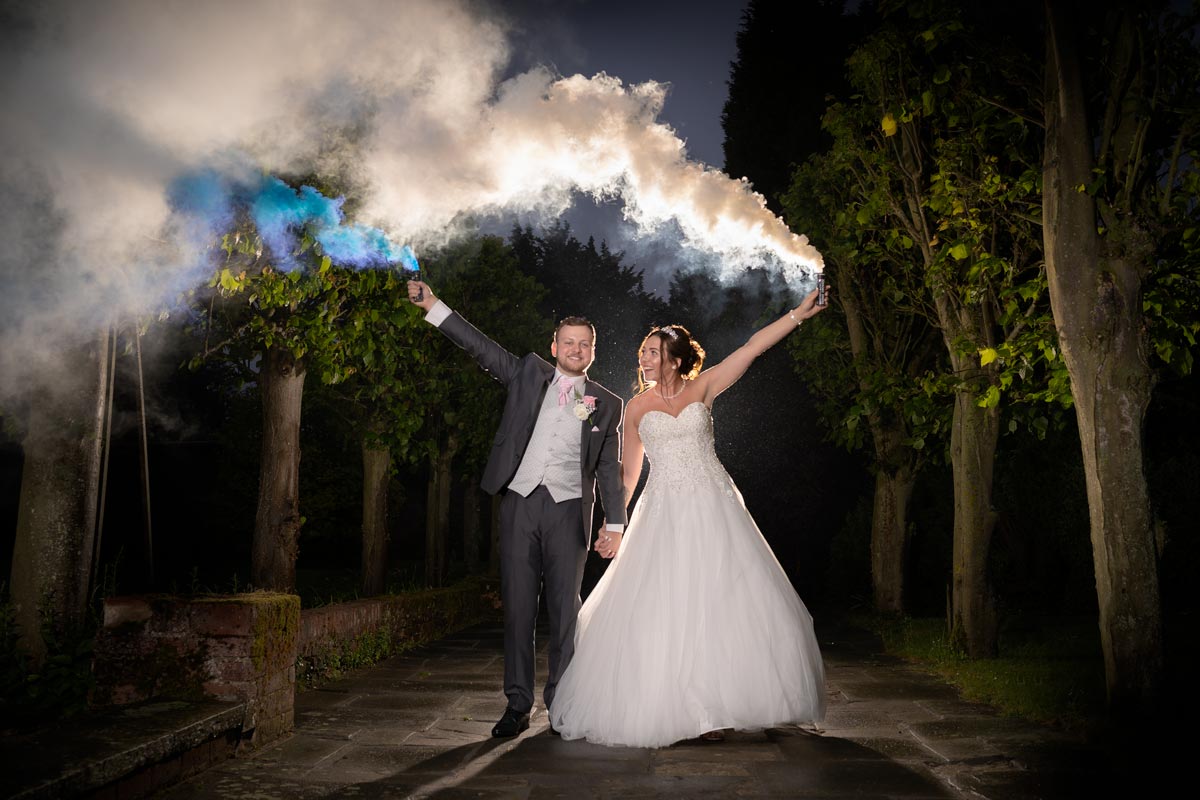 To create a silhouette image against an indoor background and have something a little interesting rather than a plain background.

This image was taken at The Fennes Essex wedding venue which has a sparkly effect on the black dancefloor walls. I knew the black soundproofing material would soak up the light, but I thought if I could get enough light on it combined with the sparkly effect it would create an interesting background.

I set up a Speedlight on full power but it wasn’t powerful enough, I did not want to adjust my ISO settings to allow in any more light as this would add noise to the image and I wanted it as clean as possible. Always one to be prepared, I bring studio lighting with me to weddings, I used a studio strobe light to provide enough power to create the silhouette effect I was after. On its own, it looked good, but still needed something, so I added an orange gel to provide a little colour and here is the finished photograph.

This image was taken at The Pattiswick Compasses in Essex during Jody and Ashley’s wedding in November, although it was winter, unfortunately, we did not get snow so I purchased some theatrical snow which comes as a powder that you mix with water. On its own, this would not have been convincing enough so I incorporated the lantern which I think helped give the image a Disney effect. To add to this I used some theatrical haze spray.

To light the photograph I needed to ensure the couple were lit well but also needed a light behind them to enhance the haze spray and act as a kicker to help the couple pop out. One more light was directed at the building by my assistant to add a little interest to the background.

One of my custom made JTP snow overlays later to add the falling snow and we had the photograph almost there, a slight adjustment to the white balance to cool down the whole image and voila, the finished photograph. 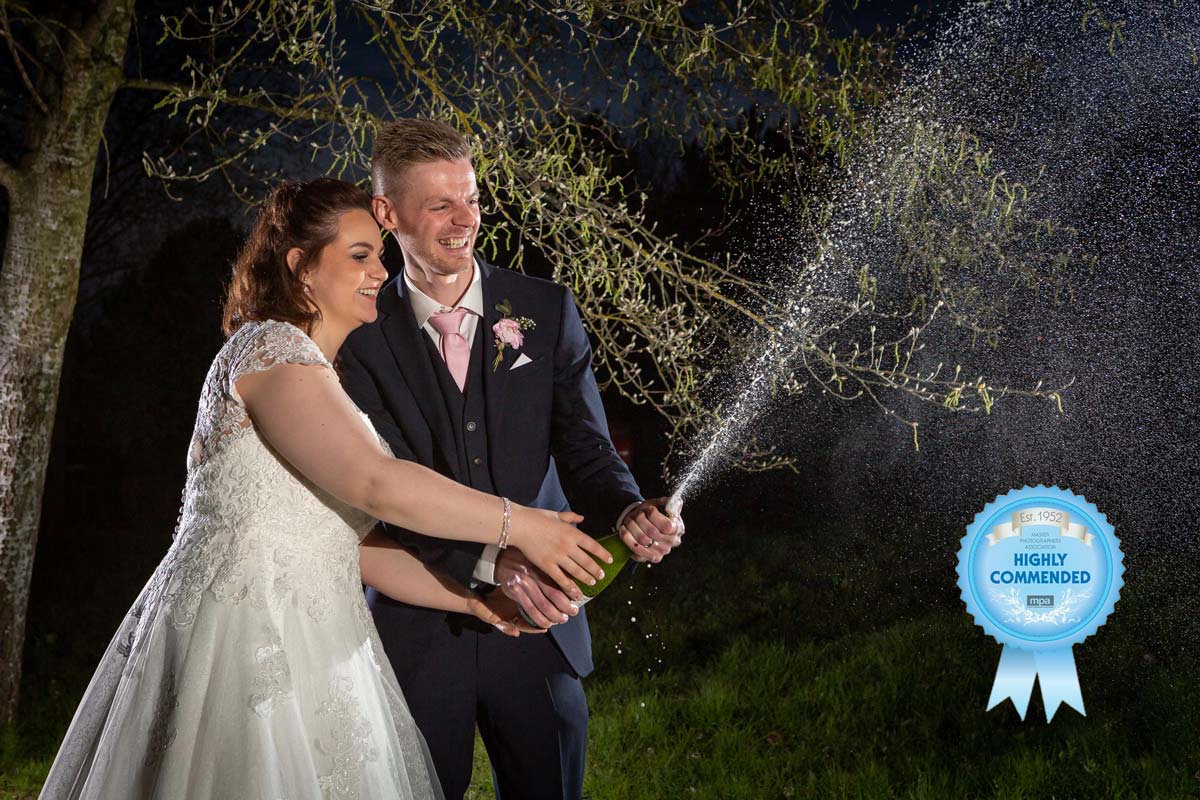 What if you are getting married in the middle of summer but want some night wedding photographs?

The simple answer is, if you book me, I’ll stay on until it is dark enough to get you the images you want.

I can often use photographic techniques to make it look darker than it actually is so depending on the style of the photograph we are aiming for, whatever the conditions on the day we can make it happen. 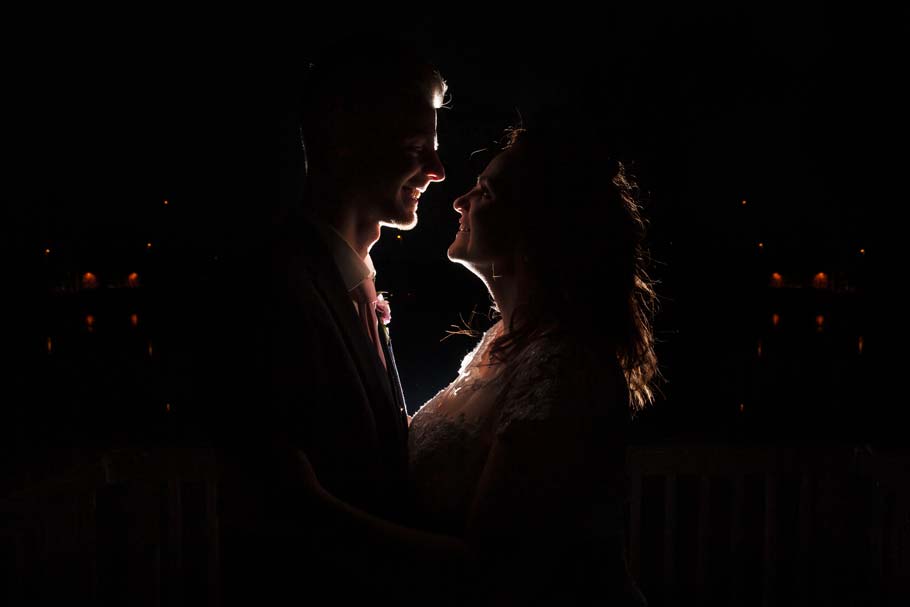 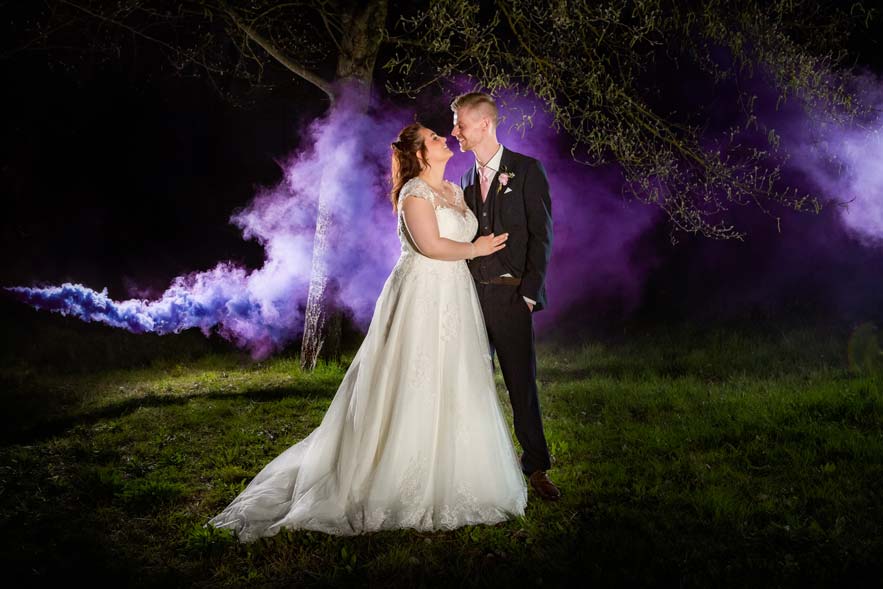 Want to know more about the technical side of creating these images?

This blog is not the place for the in-depth technical talk but I am always more than happy to explain what goes into my images behind the scenes and how we can turn a relatively ordinary scene into something quite spectacular. Some of the images on this blog are relatively simplistic in their setup while others involve multiple remotely triggered lighting, smoke canisters and a whole lot more.

Night Wedding Photography is a type of photography where there really is no limit to what you can do, whether you want smoke images, water spray images, coloured gels images, the only limit is our combined imagination.

Please check out the below images for a small sample of some of my recent night wedding photography.

If you would like to know more about this I’d love to hear from you. Your wedding will be one of the most exciting and wonderful days of your life, what better way to look back and remember it in years to come by having a unique photograph that was so much fun to create.

The sparkler exit wedding photograph is always a great image to have in your album, it is one of those images that really gets all your guests involved. Lighting these images is key, take the smoke away and you lose some of the atmosphere. With the careful placement of off-camera lighting, we can backlight the smoke really making it prominent in the scene and I think adds to the overall photograph. 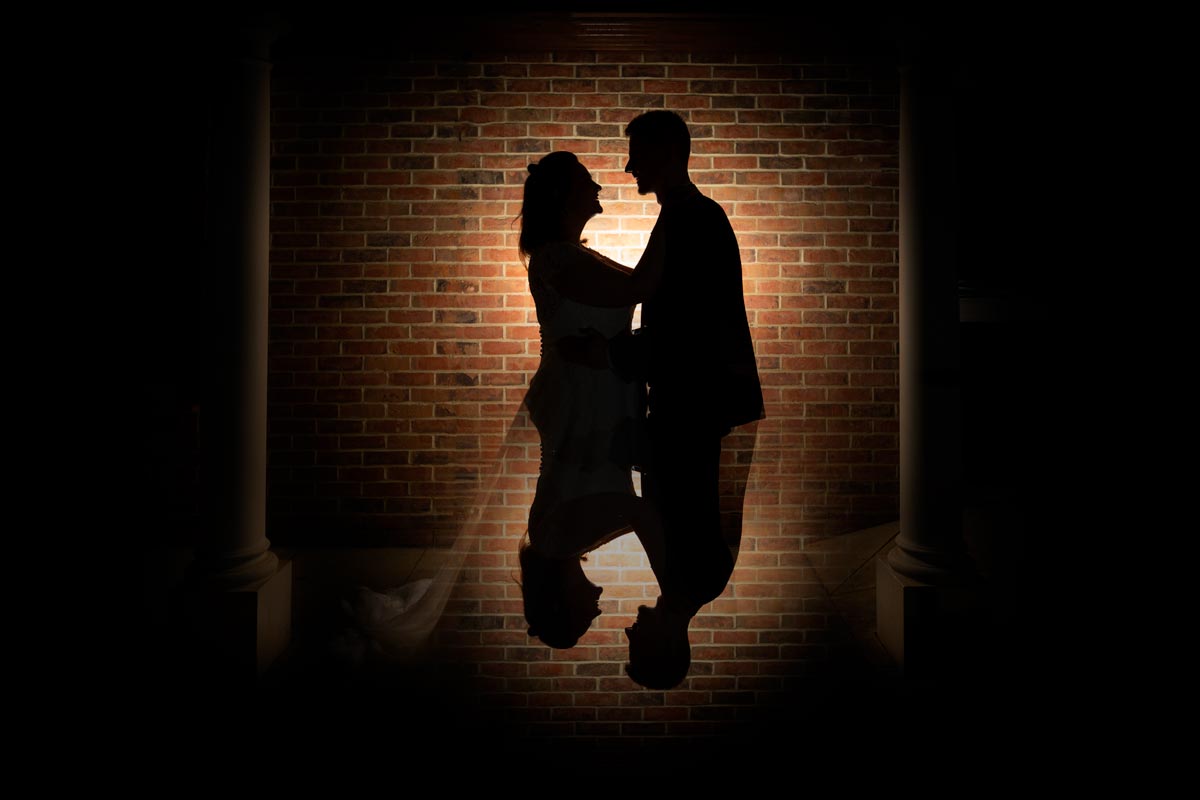 This is actually one of the more straightforward night wedding photographs to create. You can use almost any background but in this particular image, I liked the effect of the brickwork behind the couple and how the pillars framed them. Simple bounce light off the wall and a mirror held close to the lens and this is just one example of what we can create.

Anyone that knows me will know how much I love to add a little smoke to a night wedding photograph. This image was created using a single backlight, between the couple and the backlight my assistant used a smoke canister to add this feeling of mystery to the scene. The bridal colours were green so I used green smoke to tie in with the wedding colour theme. Ensuring the bridge in the backgroud was also lit added an interesting depth to the photograph. 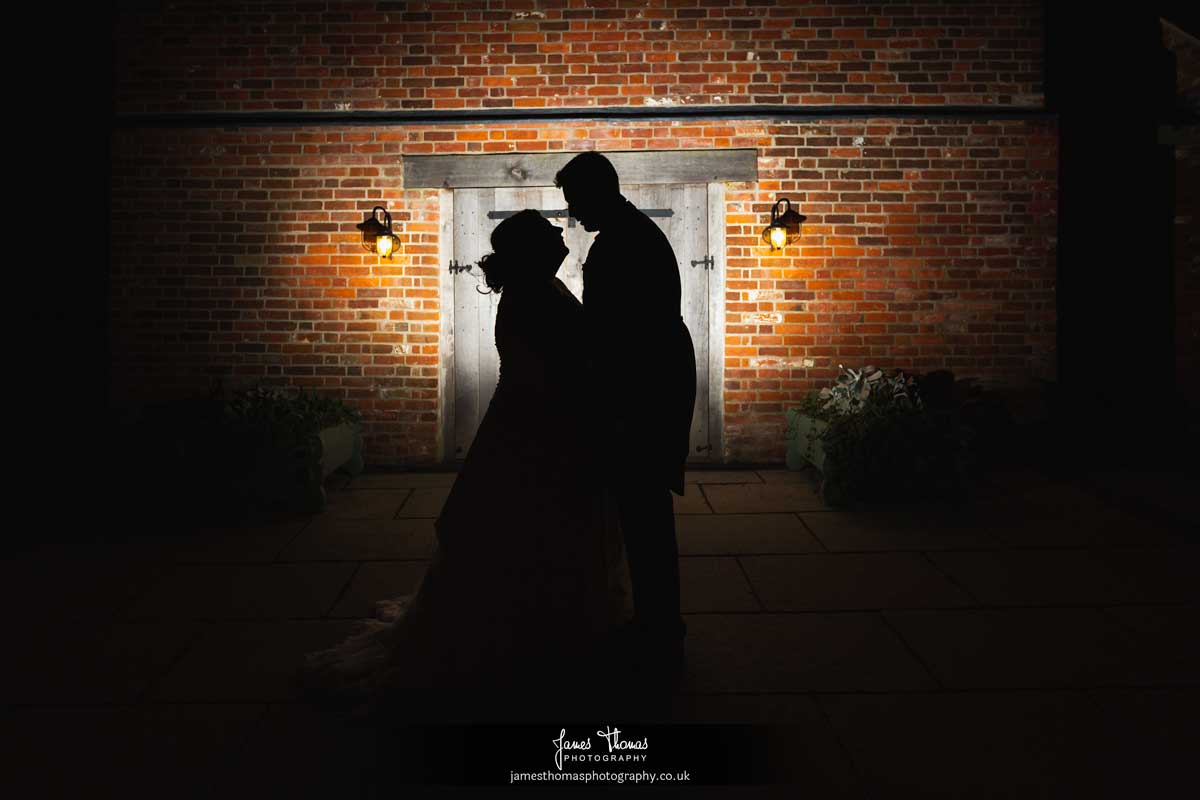 If your venue has a beautiful building then why not use them in silhouette photographs? With this image we wanted to showcase the venue in the shot. Anyone who knows Apton Hall will immediately recognise this location. A very simple setup that creates a striking image. 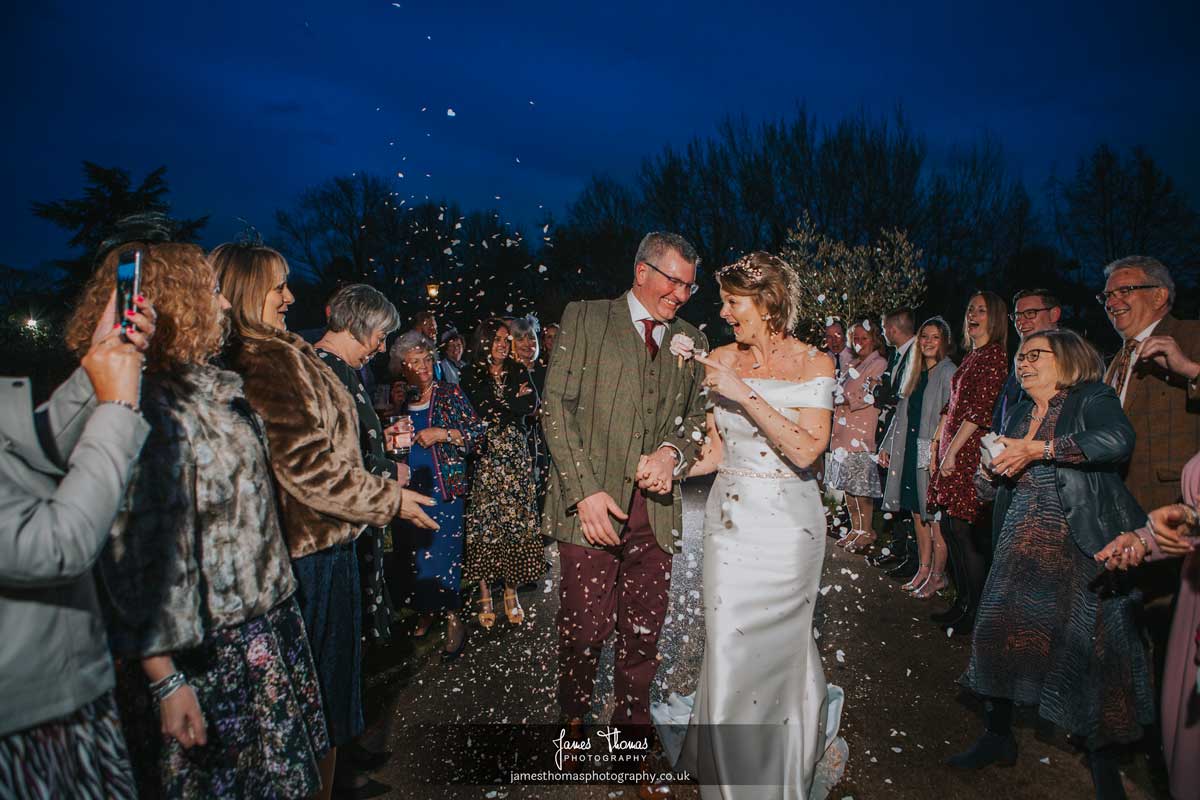 Most of the time confetti is thrown during the daylight and although I love those confetti shots and they make great photographs why not do confetti throwing when it is dark? With a couple of carefully placed remotely triggered lights, we can backlight the confetti and make a really interesting photograph.

To see more from this wedding please check out my blog by clicking here.

This one is always a lot of fun to do, I have to confess we didn’t actually use real champagne for this photograph. With two lights behind to show up all the spray droplets and a third to light the couple and we can create magic.

I hope this was interesting and gives you a little insight into the world of possibilities when it comes to night photography at your wedding. This is by no means a complete list, I have many more ideas up my sleeve and am thinking up new ones all the time.

Have you got some ideas yourself? I’d love to hear all about them and how we can bring them to life in your wedding photographs.

As an Essex wedding photographer I have photographed weddings at most of the beautiful venues through the county and many others up and down the UK, if you would like help and advice planning your wedding please do not hesitate to get in touch and I will be more than happy to help you in any way I can.

To Find out If Your Date Is Available 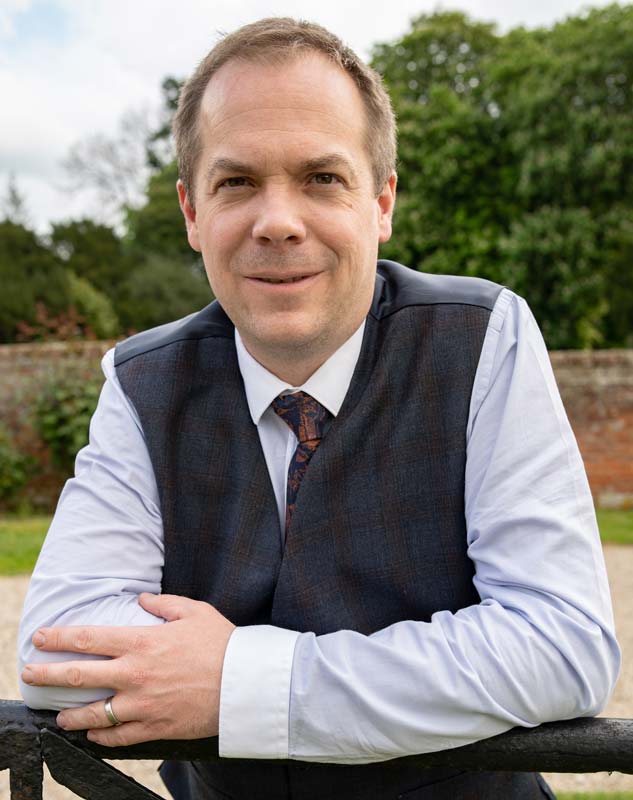 James is an Essex based qualified master wedding photographer covering the UK and beyond.

Offering wedding images that tell your story with a unique and creative edge.

James has become a very in-demand wedding photographer so dates do go quickly, please get in touch as soon as possible to avoid disappointment as he limits the number of weddings in any one year to ensure the highest level of boutique customer service.

To keep up to date with the latest news, why not follow James on social media? 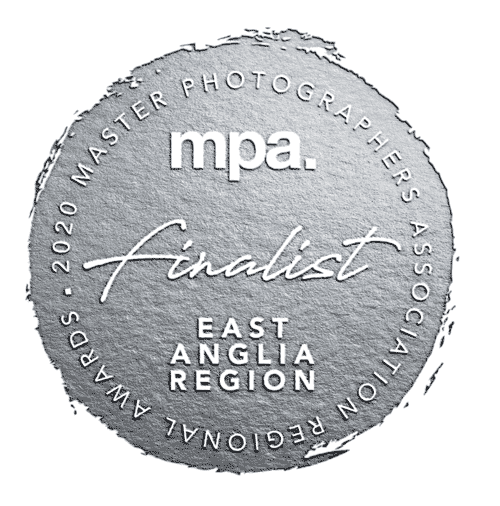 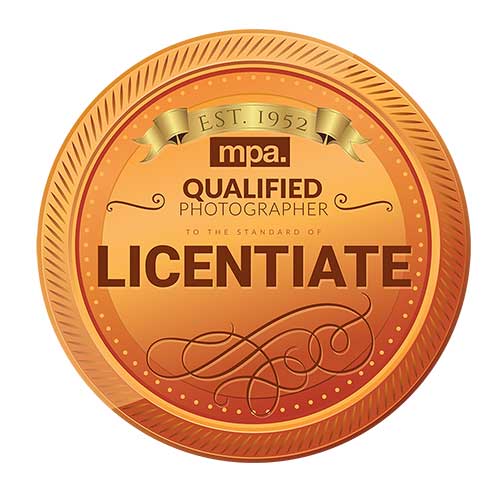